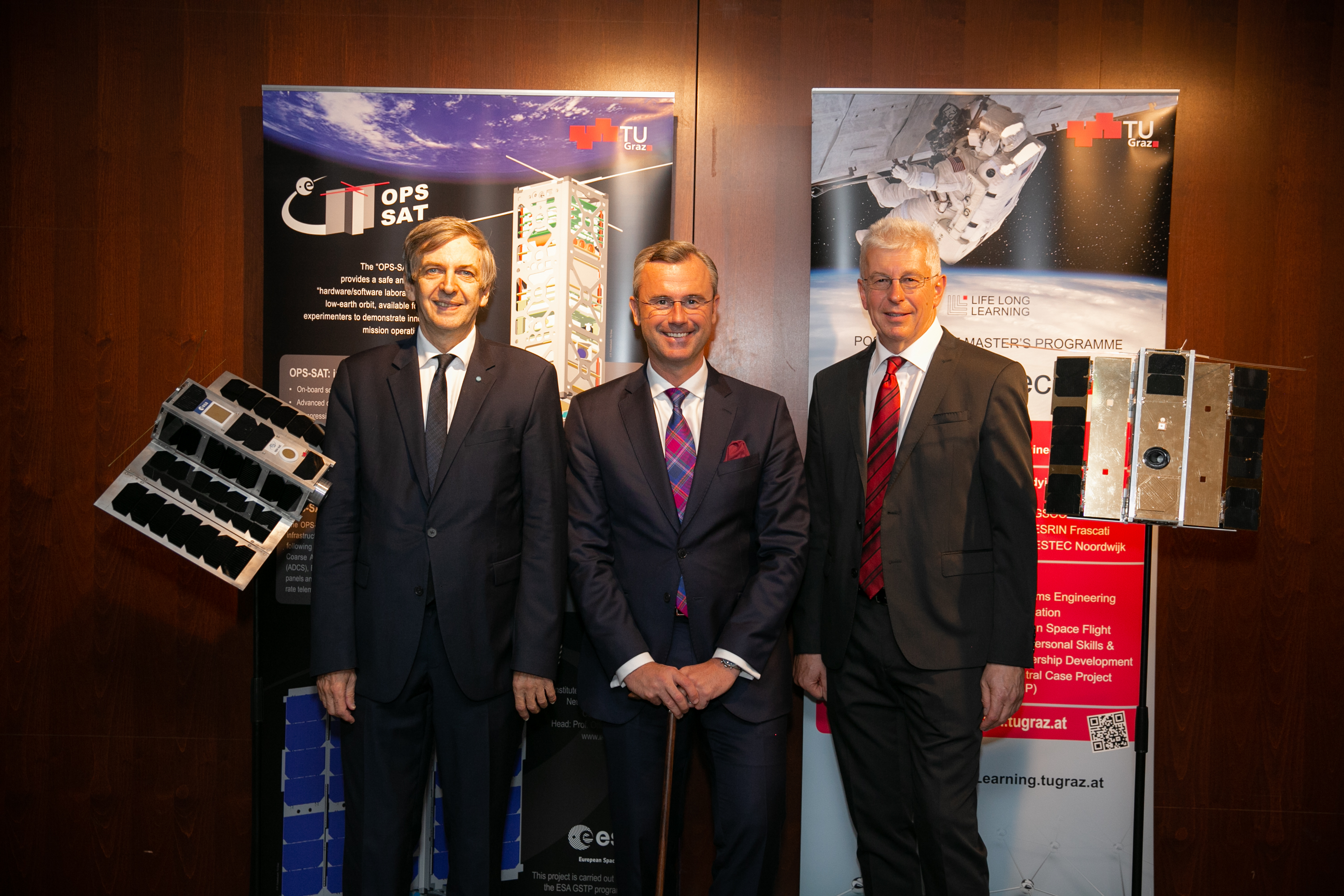 "Austrian nanosatellites deliver sensational results and capture images which are one of a kind worldwide", said Norbert Hofer, the federal minister responsible for space. At the two-day EUSpace for Business conference, Graz will again live up to its reputation as a "space capital". This high-calibre conference, being held as part of the Austrian Presidency of the Council of the EU, brought together the space community to discuss current developments in the space sector. It was an ideal occasion for Minister Hofer and the EU Commissioner responsible for space activities, Elzbieta Bienkowska, former Polish Minister of Infrastructure, to present a small scientific sensation which is the outcome of joint Austrian, Polish and Canadian collaboration: the best observed nova event to date. The discovery was made possible by the BRITE Constellation. This is a fleet of five nanosatellites, with Austria contributing the two satellites TUGSAT-1 and UniBRITE, as well as its expertise at Graz University of Technology (TU Graz), the University of Vienna, and the University of Innsbruck.

"I congratulate Professor Koudelka and his team at TU Graz on this incredible discovery. Austria has now achieved international recognition with its own satellites. The targeted strategy followed by my Ministry of developing our own nanosatellites allows us to, literally, reach for the stars", said Minister Hofer. "And the work continues: the next Austrian-produced satellites are already being developed and will soon be launched", added Minister Hofer, indicating the path for the coming years: "With Austrian satellites number 4 and 5 – OPS-SAT and PRETTY – we will further strengthen the industrial basis in the space sector."

"Small satellites and nanosatellites are handy objects with the potential to significantly advance space research, because compact satellites enable new space technologies to be tested relatively quickly and inexpensively", explains Klaus Pseiner, Managing Director of the Austrian Research Promotion Agency (FFG) which implements Austrian space activities on behalf of the Federal Ministry of Transport, Innovation and Technology (BMVIT). "Thanks to its expertise, Austria can live up to its role as a respected member state in this field. These initiatives serve both purposes of technology demonstration and education. Nanosatellites are particularly suitable for offering young students the opportunity to gain hands-on experience in the design and construction of space objects."

"The BRITE mission is already one of the world's most successful nanosatellite projects", said Otto Koudelka, Head of the Institute of Communication Networks and Satellite Communications at TU Graz and one of the masterminds behind the BRITE Constellation. "This new discovery supported by the first two Austrian satellites, TUGSAT-1 and UniBRITE, together with their sister satellites, impressively demonstrates that even sophisticated scientific and technological tasks can be reliably fulfilled by nanosatellites", said Otto Koudelka. At the University of Innsbruck, Konstanze Zwintz and her team at the Institute of Astro and Particle Physics undertake astrophysical investigations of the data on various pulsating stars captured by the satellites. "The goal of the satellites is to measure the variations in light intensity of the brightest stars in the sky as accurately as possible, and to document these fluctuations over a long period", explained Professor Konstanze Zwintz. "It is only through such measurements that we can learn more about the internal composition and development of stars, in order to find out more about our sun’s early days, and its future development."

Austria contributes two satellites to the BRITE Constellation
The BRITE Constellation (http://www.brite-constellation.at) is a fleet of five nanosatellites which capture the light emitted by the brightest stars in the sky with a high degree of precision. Together with Poland and Canada, Austria is one of three countries contributing two satellites (TUGSAT-1 and UniBRITE) to the constellation. The BRITE Constellation orbits the earth at a height of around 800 km, and has observed over 550 stars since the start of its mission. During his daily checks of the five nanosatellites, Rainer Kuschnig, BRITE Constellation Operations Manager at TU Graz, recently discovered a new star that hadn't been there the day before and was becoming brighter day by day. Totally unexpectedly a nova had appeared. “Since the start of the BRITE mission in 2013 our five nanosatellites have captured millions of images – but these images are the only ones of their kind in the world,” says a delighted Rainer Kuschnig, BRITE Constellation Operations Manager at the Institute of Communication Networks and Satellite Communications at TU Graz. A nova, or a classic nova, is a transient astronomical phenomenon: suddenly and unexpectedly a bright, apparently new star appears. It starts off getting gradually brighter, before then slowly fading over several weeks or months.

Normally novae are discovered by special instruments designed for that purpose, based on earth (e.g. the Evryscope project http://evryscope.astro.unc.edu) and measured only a couple of times a night. However, in the case of Nova Carinae 2018, the BRITE Constellation satellites observed its entire progression – the nova's initial explosion, the maximum brightness, and the final phases – over a total period of 150 days, with unprecedented time resolution and precision. This offers the unique opportunity for experts in this area of research to develop a solid theoretical basis for the initial phases of novae, and to clarify unresolved questions.

Two further nanosatellites being developed at TU Graz
In addition to TUGSAT-1 developed at TU Graz, UniBRITE from the University of Vienna, and PEGASUS from the University of Applied Sciences Wiener Neustadt (which examines the characteristics of the earth's atmosphere), two further nanosatellites are currently being developed at TU Graz. The EUR 2.4 million nanosatellite project OPS-SAT is being developed on behalf of ESA. OPS-SAT is designed for the low-risk testing of "space software" in orbital flight – to date a taboo area in satellite operations due to reliability issues. "The aim of the mission is the low-risk testing of new and powerful processors, radio receivers and space software under real space conditions. The satellite also features a camera pointed at earth. The plan also includes the first data transmission from a nanosatellite via light, between OPS-SAT and the Lustbühel observatory in Graz", explained Otto Koudelka. The OPS-SAT space laboratory is ESA's first nanosatellite mission. OPS-SAT is scheduled to start in 2019.

The cubesat named PRETTY (Passive REflecTomeTY) is a nanosatellite comprising three cubes, each 10x10x10 cm in size, making it just slightly larger than a carton of milk. The satellite is being developed together with RUAG Space and Seibersdorf Laboratories. It will be the first nanosatellite to survey and record glacier and polar ice as well as wave motion in the oceans. The new cubesat is part of ESA's global environment and weather observation programme, and plays a role in climate change research. PRETTY will be the fifth Austrian-made satellite to be launched into space.

BMVIT invests around EUR 70 million in the space sector annually
Each year the Federal Ministry of Transport, Innovation and Technology (BMVIT) invests around 70 million euros in the space sector. Austria contributes financially to space programmes of both the European Space Agency (ESA) and the EU, creating the basis for an Austrian space industry. Around 120 Austrian companies and organisations with over 1,000 employees operate in the space industry. Total revenue in the sector amounts to around 125 million euros each year.

For technical questions on the BRITE-Constellation satellites: