Faßmann, Mahrer, Egerth & Burtscher: On the way to "Horizon Europe" - 100 billion euro for research and innovation 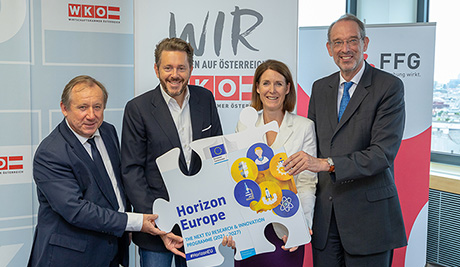 "Horizon Europe" was the focus of a joint press conference held today by Science and Research Minister Heinz Faßmann, WKÖ President Harald Mahrer, FFG Managing Director Henrietta Egerth and Deputy Director General Wolfgang Burtscher (European Commission). Following last week's presentation by the European Commission of its proposal for "Horizon Europe", it will be particularly up to Austria, together with the other EU member states and other actors, to negotiate it during Austria's EU Council Presidency in the second half of 2018. The next EU multi-annual budget (2021 - 2027) will allocate around 100 billion euro to research and innovation. At the FFG-event at the Austrian Federal Economic Chamber, the "Overview Report on Austria in Horizon 2020" was also presented, documenting the successful performance of researchers and companies in the current EU Research Framework Programme “Horizon 2020”.

"Horizon 2020" is a success story with high European added value and proven benefits. "Horizon Europe" will continue to support the entire research and innovation cycle and make a targeted contribution to increase the scientific, economic and social impact of European research funding. Like „Horizon 2020“, the programme is based on three pillars: Pillar I ("Open Science") will continue to focus on excellent science, mainly through the European Research Council (ERC). Pillar II focuses on global challenges and industrial competitiveness and provides for "missions" to achieve goals with a high social relevance and increased visibility. Pillar III ("Open Innovation") is new and aims in particular with the European Innovation Council (EIC) to help the EU become a leader in breakthrough innovation.

Faßmann: Advancing negotiations on "Horizon Europe" as far as possible

"It is gratifying that the European Commission is placing a clear emphasis on research and innovation withinthe new financial framework. In addition, the synergies of the individual programmes are to be used to a greater extent. This applies in particular to the complementary use of resources from the Framework Programme and the Structural Funds, but also to synergies with Erasmus or the common agricultural policy. This additionally expands the impact of research and innovation", emphasised Science Minister Heinz Faßmann. "'Horizon Europe' is the most ambitious funding programme for research and innovation to date. A novelty is, that we focus on those areas that affect our daily lives. Examples could range from the fight against cancer to clean transport and plastic-free oceans. We want to take the negotiations on 'Horizon Europe' as far forward as possible during our EU Presidency," said the Science Minister.

Burtscher: "Horizon Europe" - A successful mixture of the tried and tested as well as the new

"'Innovation rules' - this insight must be firmly anchored in the economic policy agenda. 'Horizon Europe', the largest research and innovation funding programme in the world, is therefore the main lever with which the European Union can support prosperity and growth. The participation of industry is crucial to this leverage effect. This benefits us all - small businesses, large companies and society as a whole. The equation is: Strong budgets for innovation and research + entrepreneurial performance = more future and competitiveness for Austria in order to achieve our goal of joining the group of innovation leaders," emphasized Harald Mahrer, President of the Austrian Economic Chambers.

Austria's companies can draw on a very positive participation in the ongoing "Horizon 2020" programme. By March 2018, more than 460 Austrian companies had received EU funds totalling 325 million euro for their innovation projects. So far, a total of 871 million euro has been brought to Austria. The new edition of the EU research and innovation funding programme aims to strengthen Europe and lead the economic regions with innovations. For Austria, a successful negotiation process within the framework of the EU Council Presidency is an opportunity to make 'Horizon Europe' practice-oriented and to get the maximum out of it so that Europe and Austria can benefit even better as off 2021," said Mahrer. "We must ensure that the market and science move even closer together. This requires that science, industry and financial companies cooperate even better. Business will launch initiatives to this end. My expectations of 'Horizon Europe' are therefore high: in the end, more than 2 billion euro will flow into Austria between 2021 and 2027, of which approx. 800 million euro will go to companies".

FFG-GF Egerth: Austria is successful and this can be measured.

"From the FFG's point of view, it is crucial that 'Horizon Europe' promotes both basic research and disruptive innovation and addresses key technologies and digitisation", says Henrietta Egerth, Managing Director of FFG. In the European Innovation Council (EIC), she sees "the opportunity to close the much-lamented gap in Europe between the laboratory and the market". The FFG, as National Contact Point, also keeps an eye on the application rules. The proposal for "Horizon Europe" provides for further simplifications in proposal application and processing. "It is in everyone's interest to increase legal certainty and reduce administrative burdens," said Egerth. She also stressed that "Horizon Europe" must go hand in hand with the EU's "Digital Europe" programme, which provides for investments of around 9,2 billion euro (2021 - 2027) to meet the digital challenges of Europe. "As the National Contact Point for the EU Research Framework Programme and also for being responsible for the Digitisation Agency DIA, we are a strong research, innovation and digitisation partner at national and European level.“

Finally, the FFG Managing Director referred to the "Overview Report on Austria in Horizon 2020" prepared by the FFG on behalf of the ministries, which confirms the above-average performance of researchers and companies to date: "Austria is successful! Austria can record already in three programmes (ERC, ICT, TRANSPORT) more than 100 million euro in return."