Vienna (6/3/2019) – A key factor for the output of our innovation system is the speed with which new ideas and discoveries arising from basic research are put to commercial use. “That means the Government’s planned excellence initiative must be simultaneously accompanied by an innovation campaign,” say Henrietta Egerth and Klaus Pseiner, the Managing Directors of the Austrian Research Promotion Agency (FFG), at the FFG’s press conference presenting the results for 2018 together with the head of the Economica Institute of Economic Research, Christian Helmenstein.

“The key cornerstones of such an innovation campaign are planning security provided by the Austrian Research and Technology Funding Act (FTFG), dynamic development of R&D budgets, and greater autonomy for funding agencies,” explained the FFG Managing Directors. As a result of substantial efforts in recent years, Austria has certainly caught up to the innovation leaders amongst the industrialised states, a fact confirmed by the OECD in their latest economic survey of Austria: “Structurally adjusted, the business sector in Austria has invested more in research and development than businesses in any other OECD country,” they said summing up the current results. “But there remains room for improvement which we must realise if Austria is to continue to be one of the best locations in the world for research.”

The Austrian economy is facing increased pressure to adapt. While traditional market structures and business models are losing relevance, this also opens up new opportunities for innovation. “We are actively focusing on new topics, and responding quickly to changing developments in the innovation system. Many of the steps we have taken, especially concerning SMEs and collaboration between business and research, have helped to make Austria a leading research location,” explained the FFG Managing Directors. 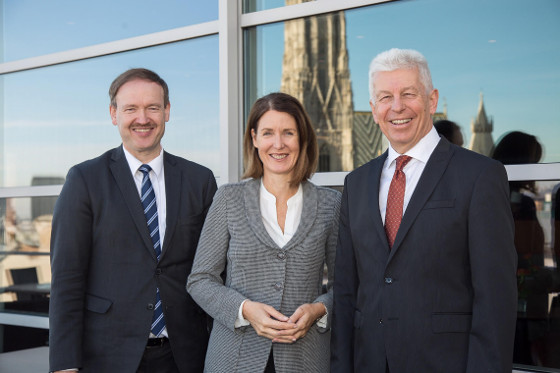 Economica: FFG funding is having an impact on communities in rural areas

Framework conditions which encourage innovation paired with market-oriented funding programmes are more important than ever for structural change in the economy. This applies in particular to rural areas, as a recent assessment by the Economica Institute of Economic Research on the regional impact of FFG funding has shown.

It assessed data from a total of 9,273 funded projects and 15,534 project partnerships which ran during the period from 2014 to 2016. The total funding amounted to EUR 1.2 billion. In absolute terms, capital cities and university cities secured by far the greatest share of the subsidies. However, the relative comparison – in relation to respective economic output – demonstrated the real significance of research funding for the regional economy.

The Economica assessments support the claim that FFG research funding has an above-average impact, especially for communities in rural areas. “FFG funding makes an important contribution to the regional economic dynamics of rural communities,” says Christian Helmenstein. The analysis also shows that the research funds were distributed across all the federal provinces and regions, particularly in areas with relevant innovation infrastructure and/or industrial enterprises. In structurally weak regions such as Austria’s Mühlviertel and Weinviertel, and tourist regions including Salzburg and Tyrol, the contribution made by FFG research funding to local value creation is above-average.

On average, €1 of FFG funding activates a further €1.63 in direct financing from project partners. This means that with an average funding rate of around 38%, research funds of up to 62% of the total volume were financed by the private sector.

FG funding statistics for 2018: Research and innovation on an even broader footing

The FFG is owned by the Federal Ministries for Transport, Innovation and Technology (BMVIT) and Digital and Economic Affairs (BMDW). On behalf of Federal Ministers Margarete Schramböck and Norbert Hofer, in 2018 the FFG approved a total of 3,854 research projects involving almost 3,900 organisations. This represents an increase of 7% in the number of research projects and 14% in the number of participating organisations over the previous year (2017). “Today the FFG reaches and supports over 5,000 Austrian businesses active in research and innovation,” according to the FFG management. In the past year, funding to a total of EUR 833 million was awarded (total funding including loans and guarantees). This also includes EUR 215 million in broadband provision for 472 projects (total funding excluding broadband: EUR 618 million).

The total amount of funding awarded last year was over one fifth (+21%) higher than in the previous year. This rise can be mainly attributed to the higher funding budgets compared to 2017 for the broadband programme (up from EUR 123 million to EUR 215 million), COMET (from EUR 45 million to EUR 85 million) and e!MISSION (from EUR 32 million to EUR 52 million). “However, the higher funding budgets also reflect larger project volumes,” explain the FFG Managing Directors. “Nowadays a research project is, on average, around twice as complex for the company, making it significantly more expensive than just a few years ago.”

Of the EUR 618 million in funding for research and innovation projects (excluding broadband), 61% (EUR 377 million) went to companies of which almost half (EUR 182 million) was allocated to small and medium-sized enterprises (SMEs). “Our focus is very much on start-ups and businesses which are growing quickly, because they are exceptionally innovative and have a powerful impact on job creation,” according to the FFG Managing Directors. Funding of EUR 136 million was awarded to research institutions and competence centres (22%) and EUR 88 million to universities (14%).

The main areas receiving funding are production, materials and industrial technologies with a 26% share (EUR 159 million). These are followed by information and communication technologies (ICT) at EUR 123 million (20%), energy and the environment at EUR 111 million (18%), the life sciences at EUR 75 million (12%), and mobility and transport at EUR 67 million (11%). “When the projects are examined in detail, it is clear that more than half of all FFG funding is related to digitalisation in its broadest sense. Other key funding areas for the FFG in 2018 were aviation and aerospace, safety and security research and quantum technologies,” reported Egerth and Pseiner.

Last year the FFG celebrated two anniversaries: 50 years of research funding and the 10th anniversary of the COMET competence centres programme. The design of the COMET programme was also adjusted in accordance with recommendations made during evaluations, with the previous differentiation between K1 and K2 centres adapted to create a more modular structure. In addition, all ten existing competence centres in the third COMET centres call were subjected to an interim evaluation and approved for a second funding period.

In September the FFG successfully took the first steps towards creating a new method for research funding with its pilot call for submissions to Ideas Lab 4.0. Instead of the usual process of submitting completed project proposals, these proposals were first developed in a workshop setting. Thirty people with differing areas of expertise were selected to take part, and at the end of the 5-day workshop three jointly prepared project proposals were developed further and funded.

As the OECD also found in its survey, there is scope for improvement in the field of qualifications and human resources. As a result, the topic of qualification has gained significance for the FFG. In 2018 the FFG launched two new funding formats which specialise in digitalisation, namely the Digital Innovation Hubs and the Digital Pro Bootcamps. In addition, eleven new qualification networks submitted to the 5th call of the “Qualification Networks” programme were approved.

Austrian Packaging Day was held in November 2018, marking the kick-off for the packaging industry initiative. Between 2019 and 2021, the target is to increase the scale and quality of research and innovation activity undertaken by Austria’s packaging industry.

Since 2014 Austria has received around EUR 1.1 billion from Horizon 2020, the EU Framework Programme for Research and Innovation (as of November 2018). To date over 1,700 projects with Austrian participation have been approved, of which 525 are coordinated by Austrian organisations. Thus Austria has positioned itself extremely well within the EU Framework Programme for Research; it has been especially successful in the European Research Council (ERC) programmes and those focused on industry and SMEs.

Through its services, the FFG plays a significant role in Austria’s success at EU level. In 2018 alone, the FFG undertook around 6,200 personal consultations with interested parties, applicants and participants, as well as organising more than 100 events, training sessions and webinars involving more than 4,000 visitors or viewers. And this pays off: projects which receive advice from the FFG have an above average rate of success.

Collaboration within Austria, i.e. with the federal provinces, was also intensified. All existing collaborative agreements (Lower Austria, Upper Austria, Salzburg, Styria and Tyrol) have been renewed or continued, and will run until at least 2020. Furthermore, the FFG organised the LEBENS!Wichtig call on the topic of health technologies on behalf of the Styrian Business Promotion Agency (SFG).

Austria’s successful presidency of the Council of the European Union