International Academy of Astronautics honours Jankowitsch for his life’s work

Peter Jankowitsch, an Austrian politician and diplomat who shaped the United Nations space policy, was awarded the highest accolade by the International Academy of Astronautics (IAA) on 28 March in Paris – the Theodore von Kármán prize – for his exceptional lifetime achievements. Peter Jankowitsch paved Austria’s route to the ESA and has also been a supporter and advisor to the FFG in the field of space research for many years. 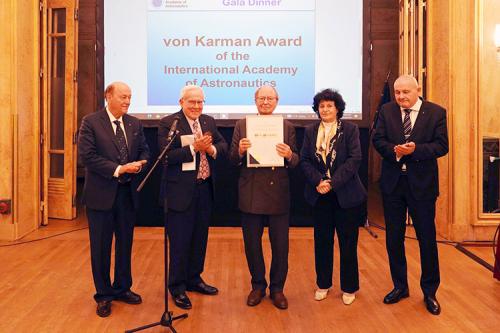 Presentation of the IAA award to Peter Jankowitsch on 28 March 2022.

Peter Jankowitsch participated in drawing up various important space treaties, including the famous Moon Treaty. In 1978, Peter Jankowitsch became an ambassador to the OECD in Paris and prepared Austria’s association agreement with ESA. He was actively involved in disseminating the topic of space in politics and society, which also helped to drive European integration.

Peter Jankowitsch supported the founding of the European Space Policy Institute (ESPI) in Vienna and was appointed to several high-ranking ESA/EU groups for space policy. He also supported the FFG for many years as Chair of the FFG Advisory Council on Aeronautics and Space.